Mr. Rupert we’re calling to let you know you’re overdue on your homeowners insurance policy and if you do not make a payment by midnight tonight your policy will lapse.

I got a disturbing voicemail as I was heading out to dinner with my family one recent Friday night. Not paying my homeowners policy puts my loan in jeopardy which puts my house in jeopardy and… It all worked out in the end, but for me this was a soul-crushing exhibition in failing at my responsibilities.

I know it happened becuase I’ve been busy at work on a few different projects. Lots of cognitive load being spent on two independent projects rushing towards the same deadline. The utter shock of missing such an important bill made me take a step back. I decided it’d be worth the effort to take inventory of all my obligations and try to grasp the bigger picture of my predicament. 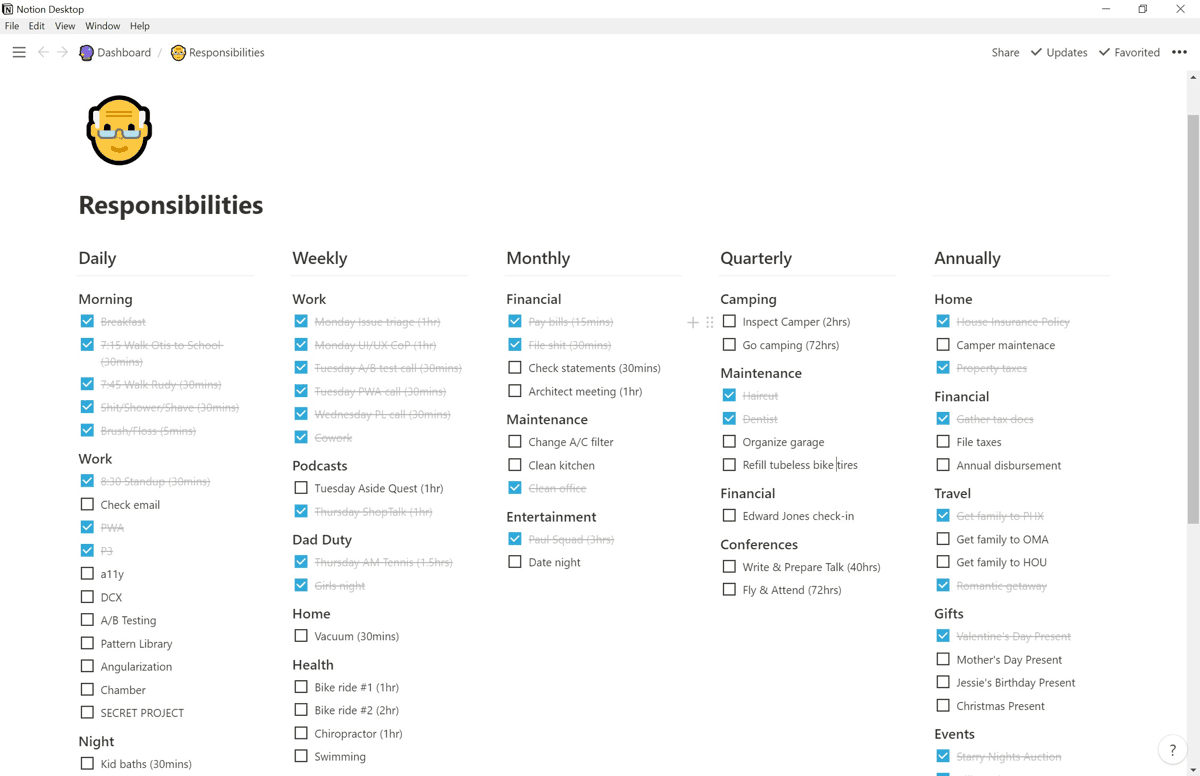 I opened Notion and made a Daily, Weekly, and Montly column in a new page. As I added more necessary and aspirational tasks I realized I need two more columns: Quarterly and Annually. The columns are being added to and refined as I go throughout my days. Itemizing responsibilities in this way has a Bullet Journal quality that I enjoy (except entirely digital, but you could do this on paper). The list feels both immense and finite.

One byproduct of this exercise is that I now have an inventory of tasks that I can choose to either Accept, Reject, or Offload. And I have insight into the cost of adding something to either of the columns. Let’s say I want to make a video game, pick up a monthly service project for a non-profit, or (surprise!) my son’s new swim team has mandatory parental participation; new responsibilities now have a quantifiable impact in the column they occupy.

It’s a bit obsessive and trite but quantifying what I need to be thinking about on a daily, weekly, monthly, quarterly, and annual basis has helped my brain immensely. My 5-column board gives me a 10,000 foot view of everything I need to get done to feel like a responsible adult. It’s still early days but I’m pleased with the results thus far and have begun offloading more parts of my brain into Notion. Two giant hands seem to suspend a golden pedestrian bridge which recently opened at the Bà Nà Hills mountain resort just outside of the city of Da Nang, Vietnam. The 500-foot bridge rests in two outstretched palms which have been weathered with cracks and moss to give the appearance of age. While walking along the attraction visitors can look out over the sweeping mountains at a height of nearly 4,600 feet above sea level, and take in the beauty of the bright purple Lobelia Chrysanthemum flowers which dot the structure’s perimeter. The bridge is part of a $2 billion investment to bring more visitors to the area, and joins a 20,000 Leagues Under the Sea-themed park and French gardens. (via My Modern Met) 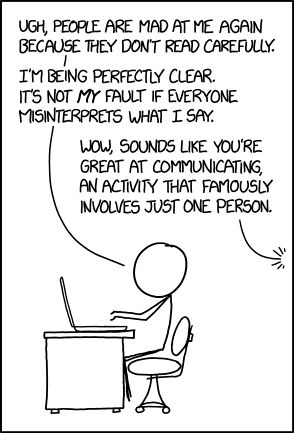 "But there are seven billion people in the world! I can't possibly stop to consider how ALL of them might interpret something!" "Ah, yes, there's no middle ground between 'taking personal responsibility for the thoughts and feelings of every single person on Earth' and 'covering your eyes and ears and yelling logically correct statements into the void.' That's a very insightful point and not at all inane."

alt_text_bot
reply
"But there are seven billion people in the world! I can't possibly stop to consider how ALL of them might interpret something!" "Ah, yes, there's no middle ground between 'taking personal responsibility for the thoughts and feelings of every single person on Earth' and 'covering your eyes and ears and yelling logically correct statements into the void.' That's a very insightful point and not at all inane."

I've always been obsessed with where would be the perfect place to live. I live in the middle of Manhattan, with all its variety and scale. This is where I dreamed of living when I was in Berkeley, and when I was growing up in the 60s and 70s in Queens. When I lived in Palo Alto I dreamed of living in Berkeley. When I lived in quiet places I dreamed of noisy ones. When I was poor in Silicon Valley, I dreamed of a hot tub and swimming pool and big oak trees and a creek and a place to throw great parties. When I grew tired of parties, I moved to Boston to live the academic life. I've lived in the midwest, the deep south, up and down both coasts. Yet still I dream of the perfect place. At this point I believe it doesn't exist.

My mother had a dream like this, about our family. In her dream she was June Cleaver, her husband was Ward, her sons were Wally and Theodore. She wouldn't have put it that way, but when you added up her expectations that's what it came to. But she was no June Cleaver, that's for sure (because JC was a character in a TV show, not an actual person). And none of us were who she dreamed we should be.

I'm still looking for the perfect place to live. I have a list of Zillow subscriptions. I have the economic means to live in any of them. And the personal freedom. Yet for some reason I don't move. It's never the day to go, or even the day to start to go. Maybe because by now I know that when I set up shop in any of these places it will be the same life as it was in NY, and in Berkeley before that, and Florida before that, etc etc.

I thought of this story when I saw this picture of the living presidents and first ladies, with one conspicuous absence, the current president. He too has an aspirational story. He was always looked down on in NY society. He may have been educated, but he was crude. He was from Queens. His dream was to Show Them, to make a place for himself at the top of the pyramid. Then they'll see, I imagine the story-telling voices inside Donald's head say. But that's just what he thinks he wants. It's the equivalent of my mother's dream of being June Cleaver, or my hope to find the perfect place to live. He actually just wants to want to be included. Because this is his chance. Right between Michelle and Melania there's the spot for the Current Leader of the Free World. He could have shown up, been gracious and been photographed in the place he created for himself. But that isn't what he actually wants. With an eye for unusual juxtapositions and serendipitous moments where the universe seems to synchronize itself just so, photographer Denis Cherim is there with his camera seeing what the rest of us do not. The ongoing series called the Coincidence Project incorporates a wide variety of photographic approaches from landscapes to street photography and occasionally portraiture. Gathered here are some of our favorites from the last few years, but you can see hundreds more photos by Cherim over on Flickr and Facebook . (via Booooooom) These are all fantastic.
California
Next Page of Stories